Y-noT Be a Responsible Boater
In Honor of Tony Borcia

About The Y-noT Project:

The Y-noT Project organization was formed by Tony Borcia’s family and friends. It seeks to end intoxicated boating tragedies. The Y-noT Project is not an anti-drinking and boating campaign, but instead encourages safe, responsible boating.

Tony Borcia was 10 years old when he went tubing with his father and siblings on the
Chain O’ Lakes on July 28, 2012. Tony was having the time of his life until he fell off the tube. Before his father could pick him up, he was hit by a large boat despite wearing a bright red lifejacket and waving his arms. The man who hit Tony has been convicted of operating his boat under the influence of cocaine and alcohol. The tragedy of Tony’s death may have been prevented if the driver had been stopped by the police when he was seen by witnesses hours earlier driving his boat erratically and recklessly. Unfortunately, patrols on the Chain O’ Lakes have been drastically reduced because of budget cuts.

Driving a boat is one of last places where it is still socially acceptable to drink and drive. It is so prevalent that many homeowners on the Chain O’ Lakes will not let their children in the water on the weekends. (We unfortunately did not know this until after Tony’s death.)

Wow, we did it again! With your support, we had yet another enormously successful Wiffle Ball Tournament -- almost 500 players and huge numbers of friends and family coming out to cheer on their favorite teams. Thanks to everyone who came out to play ball, volunteer, and support the Y-noT Project!

Congratulations to all the winners!

And a huge THANK YOU to everyone who participated in and supported yet another successful event!  We raised over $50,000, another truly incredible result!

Top Stories of the Decade: 2012 -- Boating Death on Chain O'Lakes Had Lasting Effect On Boating Safety

Dec. 16, 2019: One of the Chicago Tribune's Top Stories of the Decade: A look at how the Y-noT Project has affected boating safety on the Chain. This is made possible by your continuing support! There is no better way to honor Tony's memory. 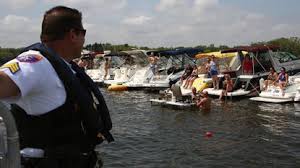 Drunk driving victims turn tragedy into a chance to help others

Boating on Lake County-area Waterways Is Getting Safer, Officials Say

Illinois Department of Natural Resources Conservation Police Sgt. Rich Riedel, left, and Officer Chris Winters, who is piloting the patrol boat, cruise along Grass Lake in 2015 in a boat donated in memory of Tony Borcia killed in 2012 by a impaired boater. (Chuck Berman / Lake County News-Sun)

As a result of the Y-noT Project's advocacy and in honor of Tony, several new laws went into effect beginning in 2014 in Illinois designed to improve boating safety and enhance enforcement of existing laws: This legislation was sponsored by State Senator Julie Morrison.

We had high hopes of hosting the Wiffle all Tournament this year, but we believe the time is not yet right. Our highest priority is keeping our community healthy and safe, so we have canceled the Wiffle Ball Tournament again this year.

We are really looking forward to August 2022, when our Tournament will resume and celebrate not only Tony Borcia but also our ability to gather together once again!